Blackfeet Scouts in the Flathead Valley 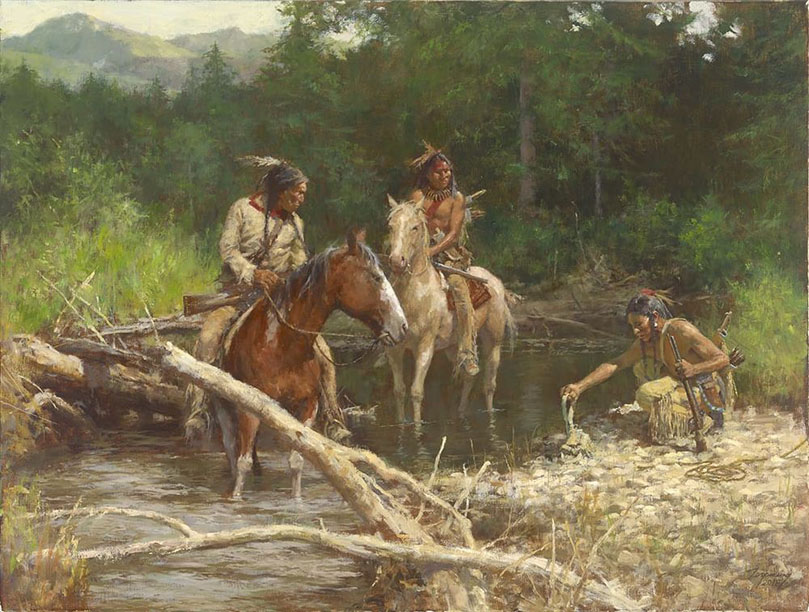 "Blackfeet Scouts in the Flathead Valley" by Howard Terpning

These Blackfeet scouts are searching for adventure in the Flathead Valley of Montana. They were generally enemies of the Flatheads and would pick a fight if they had the advantage. In this scene, the men have discovered a beaded pouch. By examining it, they will likely determine the tribe it belongs to. The Flathead people had settled in the Bitterroot valley to the south of the Flathead Valley, but they roamed far and wide in search of game, including the area around Flathead Lake. The weather is partly cloudy in the painting so it allows for interesting play of light and shadow. The mountain range in the background is identifiable as the Mission Range.

In the summer of 2015 I took my first fishing trip down the Swan river in Montana with my daughter and when I saw my father, Howard Terpning, I told him how spectacular the scenery was and showed him a few pictures. So, two years later my father and I took a half day fishing trip down the Swan river during July of 2017. He never fished but took pictures the whole time for reference. It was that trip that helped create this painting and provided all the reference material. So, I’m rather fond of this one for the memories I have during our time together.-Steven Terpning