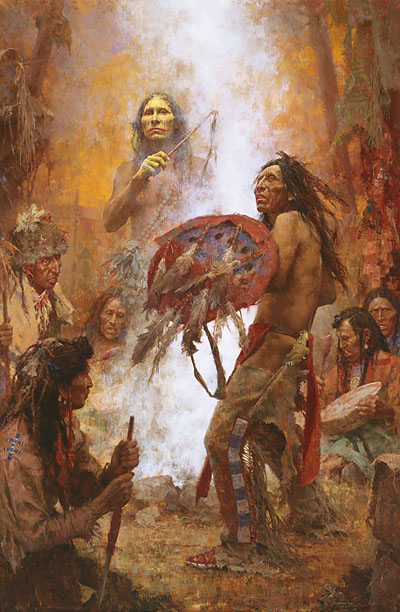 The shield was considered a medicine object among the Blackfeet people and was treated with the same great care and reverence as other medicine bundles. If the shield were to be transferred to another, it had to be exchanged in a formal ritual.

As Terpning explains the ceremony, first a smudge would be made inside the tepee. The shield would be passed through the sacred smoke four times, four being considered a magical number by Plains Indians. The recipient of the shield was painted with yellow earth over the face and hands, the face would then be streaked by drawing the fingertips downward. A red transverse band was painted across the mouth. Four drums were beaten and special songs were sung. The seller then took up the shield and dodged about, pretending to avoid blows or arrow strikes, as in a fight. At the end of the ceremony, the recipient paid the former owner with a horse.