Artifacts Gallery - Crows in the Yellowstone

Crows in the Yellowstone 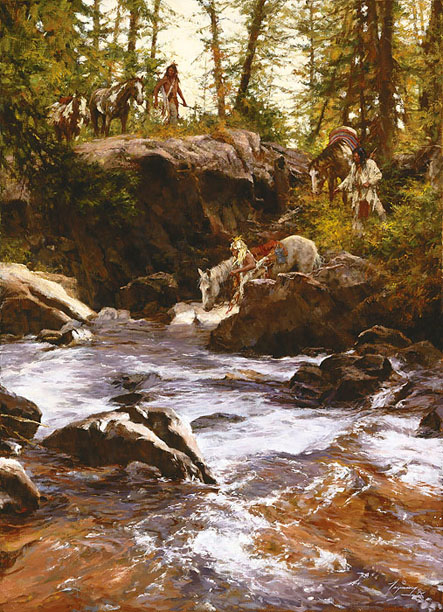 "Crows in the Yellowstone" by Howard Terpning

Government propaganda helped spread the rumor that the hot springs and geysers of Yellowstone kept “superstitious” Indians, who were “afraid of evil spirits,” away from this mystical and fertile land. Declared a national park in 1872, Yellowstone was the scene of a set of hostile encounters between Chief Joseph’s fleeing Nez Perce and visiting tourists in 1877. The conflict created a public relations nightmare for the fledgling park service. The rumor, which persists today, was created and perpetuated in order to counteract the subsequent bad press and to draw tourists back to the park.

There is a world of difference between recognizing the sacred nature, mystery and power of a place and being afraid of it. The Crow respected and revered what they called “land of the burning ground” or “land of vapors.” Although they lived primarily in the region to the east of what became Yellowstone National Park, the Crow camped and hunted throughout the region.

The Crow were expert horsemen. They dubbed the horse "Ichilay," meaning “to search with,” perhaps referring to the search for enemies and game. While other Plains tribes used the travois for hauling, the Crow, from children to elders, all rode and used packhorses that enabled them to travel fast no matter what the terrain. The Crow were regarded as premier horse thieves. One of the four military tests for an aspiring Crow warrior was to sneak into an enemy camp at night, capture a fine horse and bring it back successfully.

It was then almost impossible to catch the Crow, especially if they took refuge behind the Absaroka Range in what is now Yellowstone.