Mystic Power of the War Shield 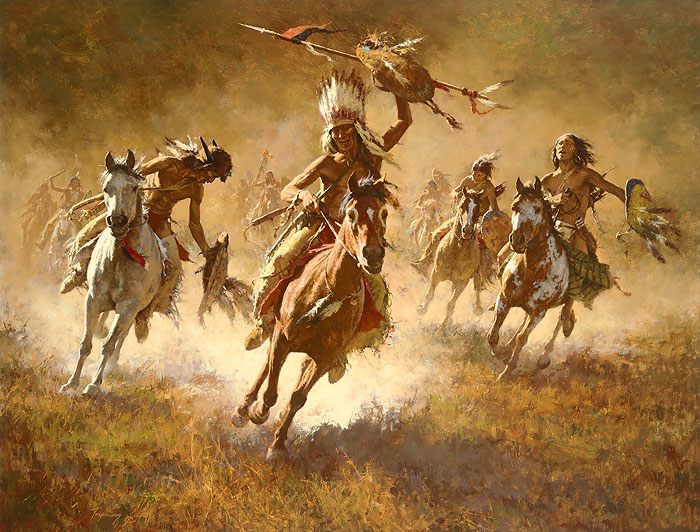 "Mystic Power of the War Shield" by Howard Terpning

Because warriors depended upon the shield to protect them in battle, they went to great lengths not only to construct it as strongly as possible but also to have protective spiritual powers imparted to it. Here, Cheyenne gallop at full speed, shaking their war shields at the sun, then leaning down to brush them against the grass, invoking medicine believed to turn away enemy bullets and arrows.

A warrior might spend months making a shield, working and reworking until he was satisfied that it was done just right. Often he decorated it with symbols of his own personal medicine, given him by a spirit guide. He was likely to ring it with feathers and charms. When he galloped forward in a charge, the feathers on his shield, as well as any tied in his hair or his pony’s mane and tail, would stream in the wind and make him appear even fiercer than he might have been. He had a fine sense of pageantry and of the psychological effect it might have upon the enemy who faced the charge.

The shield was jealously guarded against anything that might diminish its spiritual power. Its loss to an enemy was regarded as particularly dangerous because the enemy might use its magic against its owner and those around him.