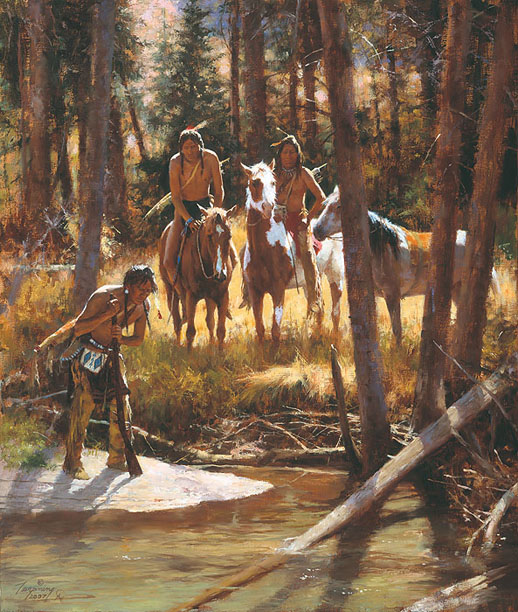 If you had any doubt about the story in this painting, the firearms and weapons that these Native American hunters carry are ample evidence of their intent. Great Plains grizzly bears have been extinct for over 100 years but when this species was abundant, a bear kill was a mark of great bravery and a grizzly claw necklace was a coveted trophy and prized possession. Even with the rifle, taking a grizzly down was no easy hunt since the bear could take a bullet or two and still keep coming. There are scores of Native American legends about bear and the bear track symbol on clothing and other artifacts, considered a good omen.

Terpning made sure that the bear track was accurate through his characteristic research, which in this case meant a visit with the finished painting to his close friend Bob Kuhn (who said the painting of the bear track was exactly right). The focal point of the image is the light area with the bear track. From there the eye moves up to the pinto’s white and dark markings. The riders on the light field with the shadowed pines make a study unto themselves. The large tree fallen in the foreground reinforces the angle of the bow cases and bows making for an elegant vertical composition.