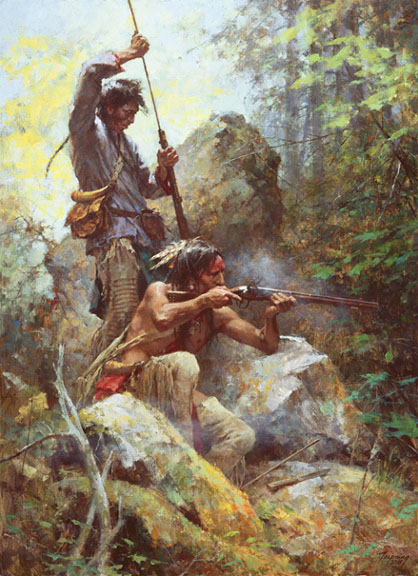 Warriors engaged in battle, a fine art first for Howard Terpning«. It is a moment captured with a veteranÆs eye: rarely does a soldier see or aware of much in battle except what happens immediately around him. This is a classic Terpning, subtle and elegant to the eye because of a powerful and complex design beneath. It is a merging of "The Long Shot" and "The Force of Nature Humbles All Man."

"White Man Fire Sticks" was the last painting Howard completed before his phenomenally successful one-man retrospective A Tribute to the Plains People. It was an image never before seen by the public and it was one of the most popular at the show.

ōThe Native people were awestruck when they first saw firearms carried by the white man and how destructive they wereö Terpning says. ōThe early muskets were smooth bore flintlocks and, for their time, were very effective although such a weapon took time to re-load as opposed to the use of the bow and arrows.

ōTo the first Americans, they seemed to be sticks that shot fire out of one end. These two Blackfoot warriors are engaged in a small skirmish with their enemy, possibly the Flatheads. This area is near the Swan River in the Flathead Valley of Montana.ö