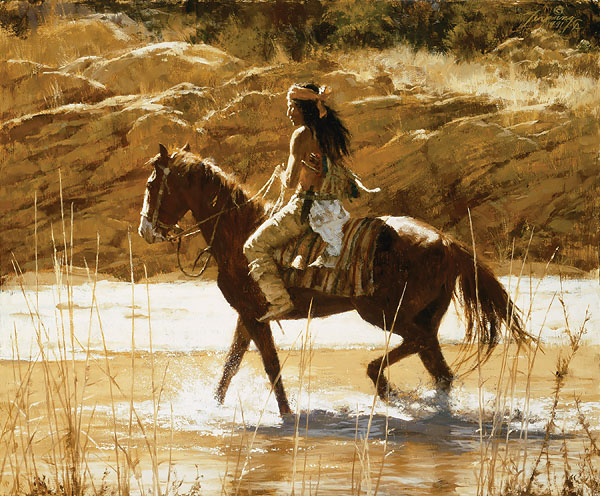 "The Captain's Horse" by Howard Terpning

The Apache, like most Plains Indian tribes, made horse stealing into a high art. Horses were captured from other tribes and from the white men and their soldiers. The introduction of the horse forever transformed everything about a Native culture that previously lived only on foot; how they hunted, traveled and even competed for honors within their tribes. “A captured cavalry horse that had been ridden by a captain is a bigger prize than one that belonged to an enlisted man,” Howard Terpning says. “The theft or capture of this horse will bring more bragging rights.”

This lone Apache, armed and confident, may be cooling off his horse, or hiding his tracks, as he cuts through the hot, dry territory in the Southwest. “We can only imagine how this Apache warrior was able to obtain this mount,” muses Terpning. “The title, The Captain’s Horse, hints at enough of a story to trigger our imagination and let the viewer draw their own conclusions.”