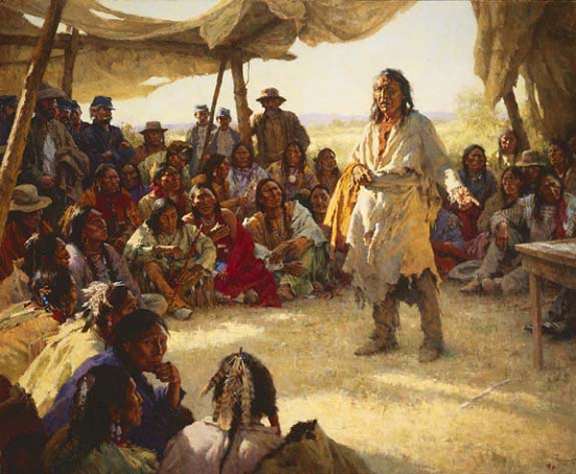 Part of his personal collection, this Terpning masterpiece has never been offered for sale as original work and would be seen by the public for the first time as a Fine Art Canvas. In the painting, we see a gathering of Cheyenne and Sioux men intently listening to a man who is an orator among his people. The words of the peace commission have been translated to him and he is expressing his distrust of those words. Terpning wanted the entire focus of the painting to be on the native people, so we see only the corner of a table and the shoes of the commissioner. The scene depicted here is not a specific treaty signing event, but it is loosely patterned after the Fort Laramie treaty of 1868. The title comes from the Indian expression that the treaty always said one thing to the white man and quite another to the native people.

This was a Personal Commission piece and was only available from November 5, 2010 thru December 3, 2010.