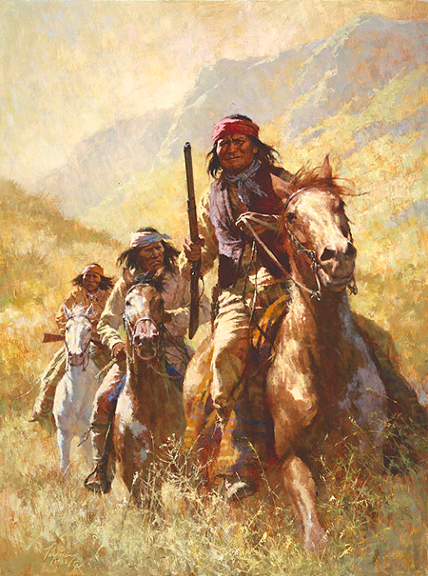 The Apache warrior was born “Goyathlay” (One Who Yawns) but died Geronimo, a legend in his own time. In the 1850s, his wife and three small children were slaughtered while he traveled with others in his tribe to Old Mexico to trade.

His life became an arc of fierce defiance against soldiers and the settlers who colonized Apache territory. It was the Mexicans who called him “Geronimo,” Spanish for “Jerome.” There were periods of relative peace for Geronimo, but those were brief. He resisted attempts to move Apaches to the barren San Carlos reservation and twice left with small bands, once for ten years, during which he conducted raids against white settlements. He kept 5,000 soldiers plus hundreds of Indian scouts busy for five months chasing him across 1,645 miles until he surrendered in Sonora, Mexico.

Enroute to the U.S., Geronimo escaped again. He surrendered months later with a promise of a return to Arizona after a brief imprisonment in Florida, a promise that was not kept. After years of hard labor in Florida he was moved to Fort Sill in Oklahoma Territory.

Geronimo lived long enough to appear at fairs and parades, selling souvenirs. He dictated his memoirs, which were published in 1906. He died at age 80 in 1909.