Artifacts Gallery - Shaman and His Magic Feathers, The

Shaman and His Magic Feathers, The 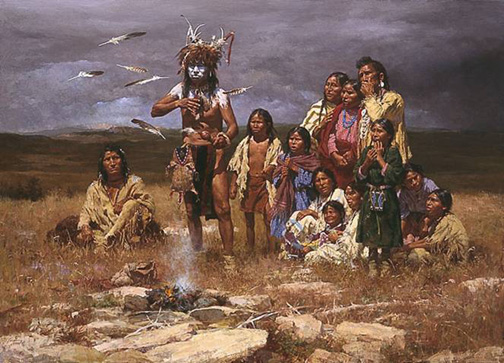 The title of shaman was given to a person within a tribe who had powers beyond the limits of human understanding. The shamans were remarkable not only for their extraordinary powers, but for their ability to control them. The native people of the American plains accepted these powers as proof of supernatural blessing, both of the shaman and of their tribes.

It was not uncommon for a shaman to give a public demonstration to inspire wonder and awe in his audience. In The Shaman and His Magic Feathers, a shaman has invited a small group of his tribesmen to witness his magical abilities. Away from the camp, the shaman has built a small fire and blessed it with sage and juniper. Before the approaching storm arrives, he will use his powers to float the feathers in the air above the flames, where they will hang for as long as he wishes.