Artifacts Gallery - Sunset for the Comanche

Sunset for the Comanche 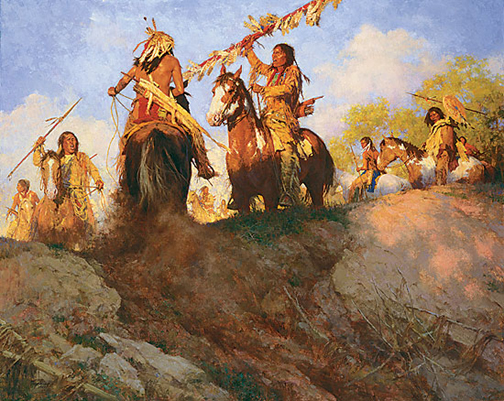 "Sunset for the Comanche" by Howard Terpning

Artist Howard Terpning’s paintings of the American West have depicted some of the most dramatic and moving events in the history of the Plains People. In Sunset for the Comanche, Terpning’s brush recalls the valiant struggle by the Comanche people to retain their land, their freedom and their way of life.
“The Comanche people ruled the Southern Plains until the last quarter of the 19th Century,” relates the artist. Their warriors were said to be some of the best horsemen in the world and yet constant warfare and broken treaties drastically reduced their numbers. The Quohadi (the antelope clan) were the last of the people to surrender. To me, this scene represents the symbol of their strength as they clung to their old way of life as a warrior society. The sun is low on the horizon and the cottonwood trees cast long shadows that forebode the demise of their culture.”