Artifacts Gallery - Trail Along the Backbone

Trail Along the Backbone 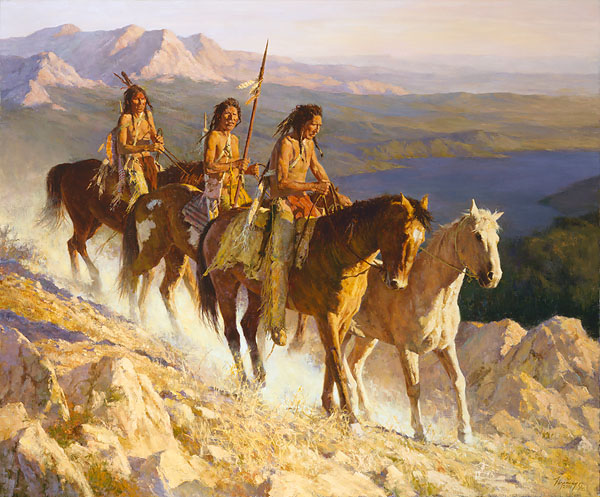 "Trail Along the Backbone" by Howard Terpning

The Blackfoot people referred to the Rocky Mountains as “the backbone of the world.” From the foothills of Rockies to the East extend the Great Plains. To the West, the Rockies ultimately drop off into the Pacific Ocean. Add in the amazing length of the Rockies from North to South and it is not hard to see that from the Blackfoots’ limited perspective at that time, they weren’t that far off the mark. There were trails that went across and over the Rockies at various places. In all probability they were originally game trails that were then used by man. This painting represents such a trail being used by three Blackfoot Warriors.

When we called Howard to let him know that we were thinking about publishing Trail Along the Backbone he mentioned that our timing was fortuitous because he would see the original again in a few days. It is part of the collection of the Booth Museum of Western Art in Cartersville, GA. Howard was going there to be honored with the Booth Museum Lifetime Achievement Award. The Booth houses the largest permanent collection of western art in the U.S. Their collection also includes three other Terpning originals, River Crow, Legend of Geronimo and On the Brink. Take the time to learn more about the Booth at www.Boothmuseum.org

With so many of Terpning’s originals in private collections, it is only through museums such as the Booth Museum of Western Art or The Greenwich Workshop’s Fine Art Edition program that a wider audience is able to enjoy the paintings of this great American artist.