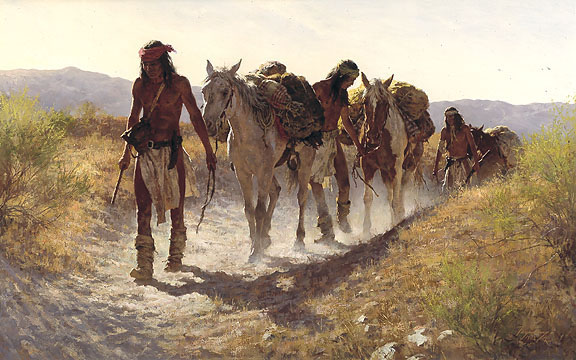 Native tribes did not allow national borders to hinder their movements, although those who lived along those borders learned to use them as a means to gain sanctuary if they happened to be pursued by American, Canadian or Mexican troops.

Though the Apaches lived primarily in Arizona and New Mexico, they ranged easily into the Sierra Madre Mountains of Mexico and considered Sonora and Chihuahua their own province. To them, both Americans and Mexicans were foreign invaders deserving of no quarter, and as a general rule the Apaches offered none. This painting depicts an Apache raiding party on its return from an excursion into Sonora, bringing home about as much loot as they could pack onto their horses.