Artifacts Gallery - Deeds of His Father by Howard Terpning

Deeds of His Father by Howard Terpning 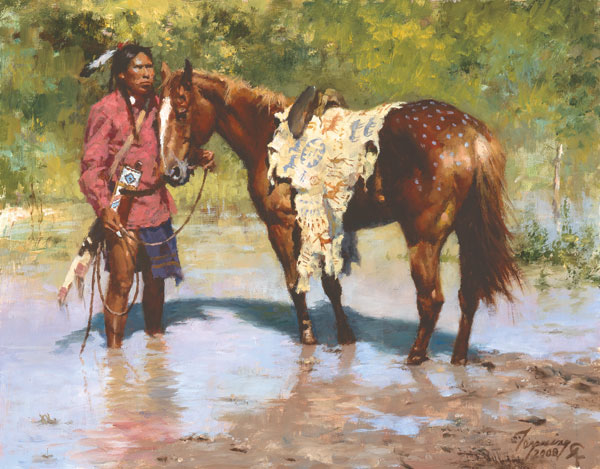 "Deeds of His Father" by Howard Terpning

In the 18th and 19th centuries, many Plains warriors told the stories of their war deeds and accounts of important events that took place each year in their lives, in simple form drawings that were not literal but rather highly stylistic—with many symbols that were understandable only to the Native Americans. These stories were drawn and painted on hides such as buffalo, elk, deer and antelope. The warrior who produced the drawing on animal hides was telling friends and foe alike of his many accomplishments and deeds of bravery.

This painting shows a young warrior proudly displaying his father’s painted robe on the back of his pony. He has placed his moccasins on the withers of his mount so they won’t get wet as he cools his feet in the water.