Journey to the Medicine Wheel 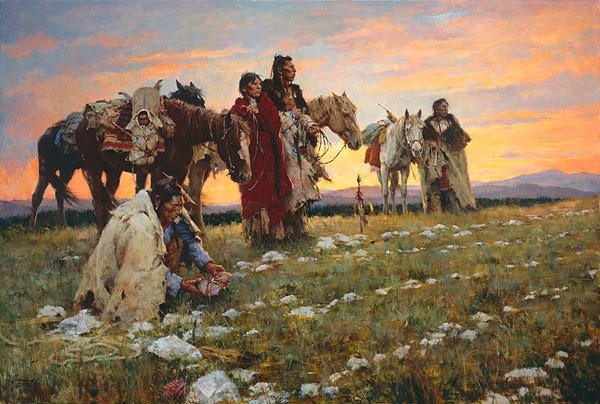 “The medicine wheel has been described by Native Americans as a Chapel in the Wilderness. The circle represents the universe. The lines to the center are messengers which carry the voice of man to God. The rock represents great grandmother earth.

“There is one such site at 10,000 feet atop the Big Horn Mountains. The limestone rocks form a circle almost 90 feet in diameter with 28 spokes. It is said that today more than 80 tribes take the long hike up the mountain to worship at the wheel. Crow tribal elder John Hill says that for more than a millennium the wheel has been a place for fasting and vision quests. There are many such wheels of varying sizes throughout the Northern Plains, some known only to the Native American.

“I first became interested in the medicine wheel when a friend brought me to the site of a small one in 1985 in the Bitterroot Range. I took a photo of the scene but it was getting dark and the image was underexposed, but at least it gave me a record of the scene. I thought there I might do a painting about the wheel, but nothing came to mind. Fifteen years later another friend sent me a newspaper article with a photo of the wheel covered with snow. I mulled over the idea for another seven years before I finally figured out how the picture should be composed. I’m relieved that the painting is finally out of my system and yet sad that the adventure is over.”