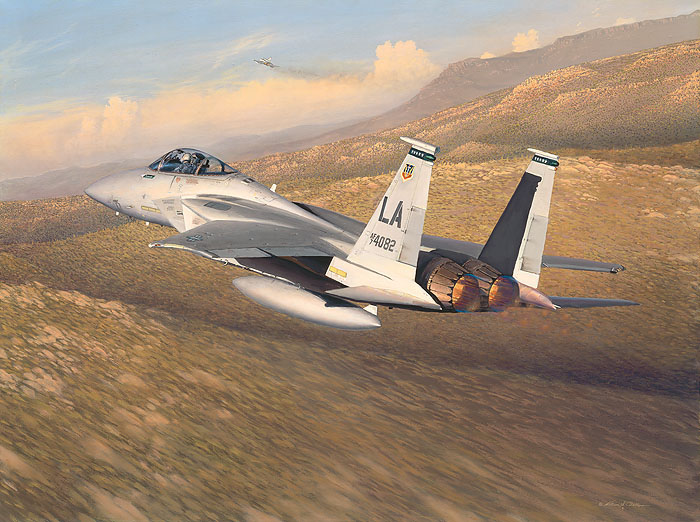 Everything about the F-15, down to the selection of its name, “Eagle,” was meant to convey all that was positive, powerful and purposeful, not only about the aircraft, but the Air Force and the United States of America. Its job: total air superiority. “Advantage Eagle" is a term that will be heard frequently as long as the F-15 is flying.

This F-15, aircraft number 4082, is an "A" version that was assigned to the Triple Nickel 555th Tactical Fighter Training Squadron at Luke Air Force Base outside of Phoenix in the early 80’s. In this action, the Air Force is in a joint training mission with the Navy over the Arizona desert. A Navy F-4, ahead in the distance, is engaged in low-level dissimilar air combat maneuvering (ACM) to evade the F-15.

The pilot is going to have to be awfully good . . . the Eagle has the advantage and is a hard plane to shake. To impart a feeling of power and motion, the landscape is at a slight angle and the foreground is blurred as the Eagle roars by at about 500 knots.