Artifacts Gallery - A Feeling of Warmth

A Feeling of Warmth 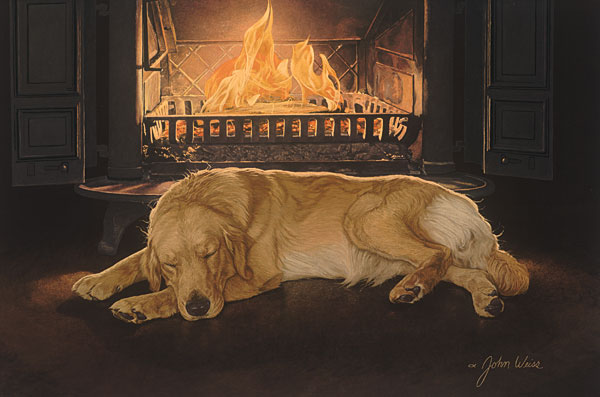 "A Feeling of Warmth" by John Weiss

As artist John Weiss remarked, “There’s nothing like sitting by the fire with your loyal dog curled up at your feet for a real sense that all is right with the world.”

". . . A heartbeat at my feet,” is how novelist Edith Wharton described her dog. "A Feeling of Warmth" is the perfect portrayal of both sentiments but we can also identify with this Golden, warming his back now and, in a little while, rising and turning to spread his belly along the heat of the fire.

“Did you ever notice that Goldens can lie in the snow with their faces buried, yet they never seem to get cold?” asks the artist. “Then they come into the house and lie so close to the flames you’d think they could catch fire. Extreme temperatures don’t seem to affect them much.” To paraphrase Charles M. Schulz, happiness is this warm puppy and this Anniversary Edition in your home will warm your long winter nights.