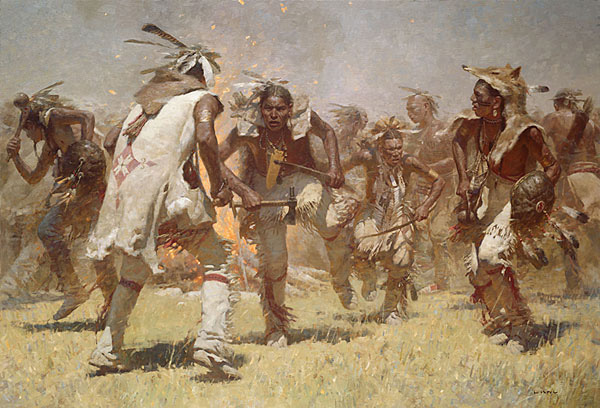 This is one of Z.S. Liang’s most dynamic visions of Native American life. The passion and might of these warriors is palatable as they twist and whirl around the yellow bonfire flames during this pre-raid ritual.

“The war dance of the Northeast Indian tribes was held before the raid,” relates Liang. “Large fires were lit in the center of the village. The fiercely painted warriors gathered around the fire. The chief would give a speech to convince his people that the forthcoming strike was with the approval and guidance of the Great Spirit. The drum started in a slow pulse rated beat. The excitement heated up as the beat got faster, accompanied by rattling and singing. The war leader took his club and stamped the ground as if to shake the universe then began to dance and sing. Warriors started to rise and join the war dance. As each joined in, they became a volunteer for the raid. The war party was formed strictly by volunteers. War dances were usually held at night.”

"War Dance" is one of the most impressive paintings Z.S. Liang has created. The energy and power of this fine work of art will transform any room in which it hangs.