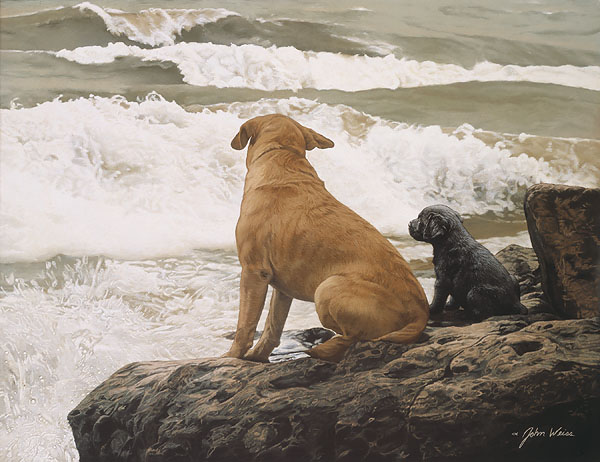 Galley Wrap Available for an additional $30

Dogs are man’s best friend but dogs’ best friend may be John Weiss, who has immortalized them with artistry and sensitivity in Greenwich Workshop Fine Art Editions for nearly thirty years. The Anniversary Edition No Swimming Lessons Today features one of Weiss’ beloved breeds and most popular. Nearly all his Lab editions are in low inventory or Sold Out at Publisher.

“The Labrador retriever is a very powerful swimmer,” he says, “known for recovery work in all kinds of water conditions including extreme cold. They were originally bred to work alongside fisherman, helping to pull in nets and catch fish. Eventually they were cross-bred with other breeds such as setters and spaniels and what we know as a Lab today became a prized game retriever for hunters, and has a famously even temperament.”

The setting for this painting is Marblehead on Lake Erie. “There’s a beautiful lighthouse and rocks that overlook the lake,” Weiss explains, “but every time there’s a nor’easter, you get tremendous waves coming in. Mom was going to take the pup in for a lesson, but the waves are too big, so there are no swimming lessons today.”

Indulge your love of Labs and motherhood with this classic John Weiss Anniversary Edition of Labrador retrievers waiting out Mother Nature.