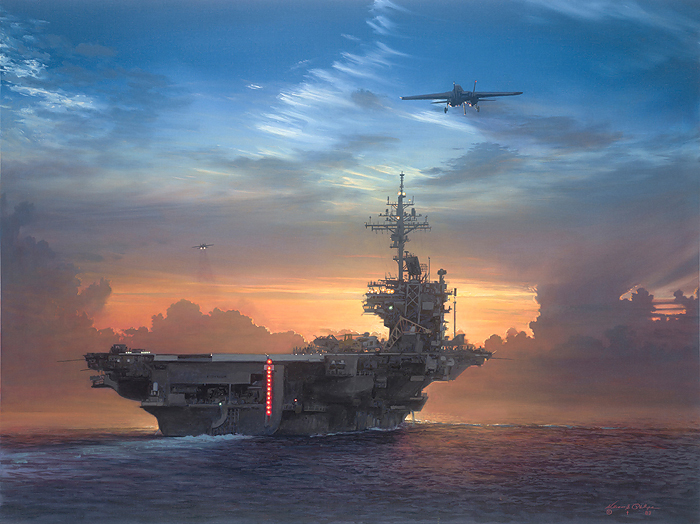 Where is the nearest carrier? is often the first question from a President when a crisis erupts overseas. A powerful instrument of diplomacy and military might, the Navy’s carrier battle group has been the United State’s reaction-force-of-choice since World War II.

Collectors, naval and aviation enthusiasts all react in a similar fashion when William S. Phillips turns his painter’s eye on these seagoing airfields. All eight of his previous Fine Art Editions featuring carriers have Sold Out at the Publisher and are only available on the secondary market.

“An aircraft carrier is exciting beyond belief,” beams Phillips. “It’s the tip of the sword and it operates that way. It’s dangerous and it’s exciting. Nothing is static. Their size is phenomenal. The sense of mission and camaraderie from the engine room to the flight crews is inspiring. For the rest of my life, I’ll jump at the chance to get on one whenever I can.”

“In the late 1970s, I had the chance to deploy on the USS Kitty Hawk (CV 63) out of San Diego, but this scene could be anywhere in the world because sunsets are universal at sea. Coming on board a carrier is tough no matter what time of day it is. But I’ll tell you, landing in any kind of daylight beats coming aboard before absolute dark. They call flight operations at this time “Pink Ops.” The CAP aircraft, both coming in and going out, are early versions of the F-14.”