Artifacts Gallery - Into the Arms of the Dragon

Into the Arms of the Dragon 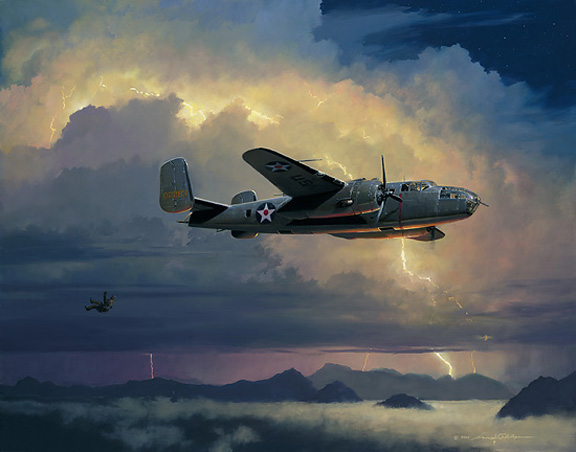 The Doolittle Raid on Japan was always designed as a one way mission: from the carrier to friendly airfields in China by way of Tokyo. Due to early discovery by Japanese picket boats, Captain David Jones and the rest of Crew 5 (aircraft 02283) left the deck of the USS Hornet knowing their one-way trip was perilously shorter. They knew that their B-25 did not have the range to make those friendly airfields, and getting to the China coast or past Japanese-occupied China would take great skill and uncommon luck. At a small break in the cloud cover over Chu Chow the members of Crew 5, who could coax their aircraft no further, left the plane, trusting their parachutes, the wind and the Chinese people to lead them to safety.
In Chinese folklore the lˇng, or dragon, symbolizes all that is good: abundance, prosperity, good fortune, nobility, and divine protection, as well as the Chinese people themselves. The dragon is believed to be the benevolent guardian of water, as well as life-giving rain and storms. As they tumbled into the stormy night sky, David Jones and his crew entrusted their safetyŚand their livesŚto the arms of the dragon.
The Chinese paid dearly for the aid and shelter they provided to American soldiers. In the Zhejiang-Jiangxi Campaign, Japanese forces killed an estimated 250,000 Chinese civilians as retaliation and intimidation to prevent further assistance of American soldiers. The brave sacrifices of the Chinese saved many lives and solidified the American people in their determination to succeed. William S. Phillips inspiring new limited edition Into the Arms of the Dragon pays tribute to the combined efforts of two nations. Both the Fine Art Limited Edition GiclÚe Canvas and Fine Art Limited Edition GiclÚe Print of this spectacular image have been signed by surviving members of Doolittleĺs Raiders.