First Boots on the Ground 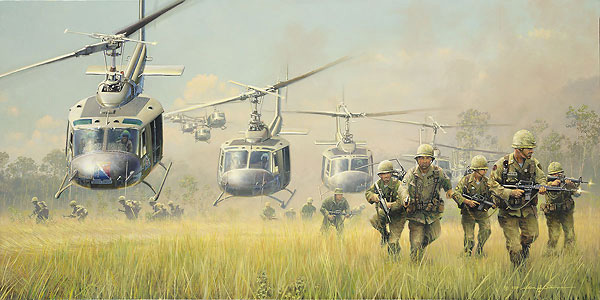 November 14, 1965, Vietnam. Amidst the low brush, elephant grass and enormous sun-baked termite mounds, clouds of dust lazily drift away from the clearing nicknamed LZ (Landing Zone)X-Ray. In preparation for an air assault by troops from the 1st Battalion, 7th Cavalry, United States artillery has been relentlessly pounding away at the perimeter of the LZ.

Helicopter pilots Bruce Crandall and Ed Freeman would go on to receive the Medal of Honor for their actions during the battle of la Drang, a battle which would go down in history as one of the most intense of the Vietnam War. This three-day struggle would later be documented in the best-selling book We Were Soldiers Once...and Young by Lt. Gen. Hal Moore (Ret.) and Joseph Galloway.