Low Pass for the Home Folks 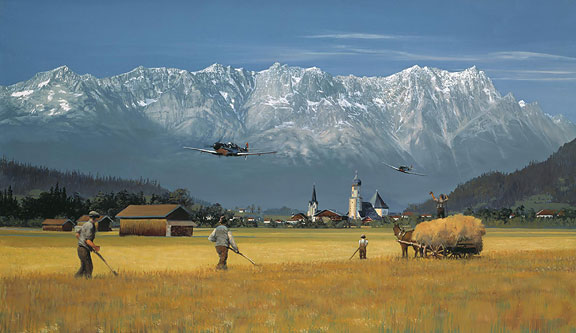 William Phillips and his wife Kristi, on a ski trip in Garmisch, Germany, discovered a war memorial in a lovely serene setting on a hillside. Around the monument were framed photographs of local young men who had died in WWII. Bill was moved by one photo of a fresh-faced boy, his arms around a cow. "This was no jack-booted Nazi. This was a farm kid who loved his home and went off to fight for it, just as American boys would have done." The artist gradually built a scenario in his mind: the lad went into the Luftwaffe, learned to fly fighters, and one day early in the war he and his buddy buzzed his home valley in their Bf-109's. "I guess all pilots have done that in every country," says Bill. "The pride of flight is universal." He checked with a German pilot who said it was strictly verboten (forbidden), "--but of course we did it anyway."