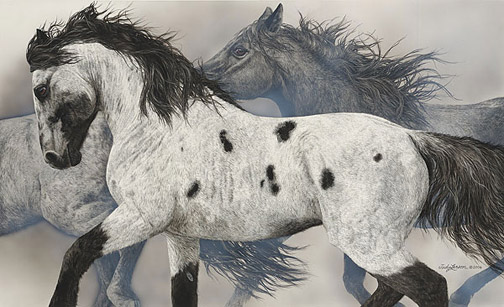 It has been said that in the early mists of dawn they were invisible; in a snowstorm, undetectable; in battle, unseen. Then, like the spirits for which they were named, they inexplicably appeared.

Ghost Wind horses carried big medicine. Along with their stealth, they were exceptionally intelligent. They were trained to be fierce combatants, but they were also renowned for their intelligent and docile nature. Their value to the tribe was known to be greater than that of any human.

Distinguishing each Ghost Wind were two to four, or a handful of dark spots, but only on its left side. "Lightning" or vanishing stripes graced the cheekbones of the face. The skin of the body was silver white, the hair more like fur, and dark "stockings" covered the legs. The direct father/son breeding line traced back to the Northwest's Siletz and Talimook peoples, who bred their horses with Russian (as opposed to Spanish) spotted horses. Quite rare, they did not appear in every generation.

Considered to be forever wild, a Ghost Wind was never "owned," but simply watched over by a caretaker or custodian. Still, its training was intense. It could be counted on to continue an attack against a foe, even after its rider had fallen. Yet, directly after battle this forceful warrior could be placed in the care of a young child. Such was the training and nature of this remarkable horse that, returning directly from the violence of warfare, a small child could handle it. A noble spirit, indeed.

Concealed imagery has long been a hallmark of a Judy Larson composition. With "The Ghost Wind," however, the portrayal, as well as the story, begins and ends with the beauty of the horse itself. The Noble Spirit Series will interpret the nature of legendary North American animals without the aid of concealed imagery.