Dance of Cloud and Cliff 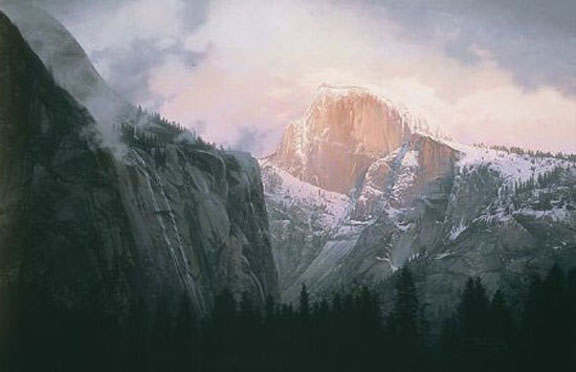 This is perhaps Stephen Lyman’s most perfect painting of Yosemite National Park—indeed. Stephen Lyman knew the trails—both charted and uncharted—and terrain of Yosemite as well the lines in his own palm. His magnificent depiction of Half Dome captures the grandeur of the landscape the way that no photograph ever could.
“I saw Yosemite’s Half Dome, caressed by gossamer clouds and bathed in the fleeting alpenglow,” said Lyman. “Can words convey this mountain drama? This is why I paint the wilderness.”
Stephen Lyman’s romance with Yosemite lasted a lifetime. The countless sunsets he spent clambering around its slopes and valleys left him with an understanding of the park and a reverence for the land that will never be duplicated. If any painting by an artist can be called a self-portrait, Dance of Cloud and Cliff is truly a self-portrait of this artist and his great, abiding spirit. Signed By Andrea Lyman