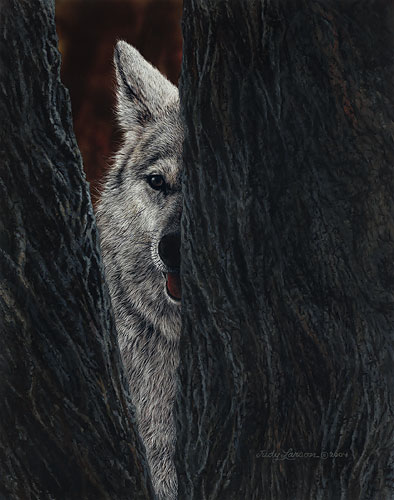 “If one is a wolf, the best way to survive is to be elusive,” says Larson. “The art of survival can depend upon how skillful one is at eluding capture, as well as how subtle one is in one’s daily activities, making it difficult to be detected. Unfortunately, and despite its wariness of people, the wolf will use natural habitats like forested areas and other settings that are in close proximity to humans. Often traveling in the open along roads, railroads and utility corridors, the wolf will also feed and rest where there is good visibility. Further complicating its survival, the wolf most commonly lives in a pack, where more than one wolf may be seen at a time. And, in the case of states that allow the wolf to be listed as “trophy game” or as a “predator,” or that encourage and support aerial wolf-shooting, even the wolf that lives far from human populations can be in imminent danger. Nevertheless, despite a shrinking habitat and, in some areas, threats to its very existence, the wolf continues to survive and to flourish.”