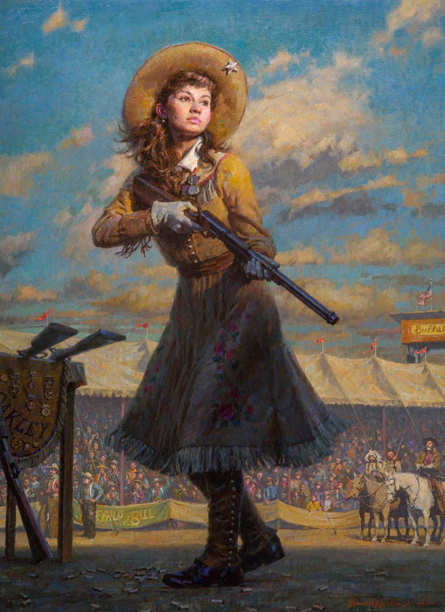 "I have long admired the life of Annie Oakley and have always wanted to pay homage to her in a painting. I decided to depict her doing what made her famous, shooting in the Buffalo Bill’s Wild West Show. She was nicknamed “Little Sure Shot” by Sitting Bull. Sitting Bull joined the show for awhile and became close friends with Annie. She was amazing and the list of trick shots she could do flawlessly brought her fame around the world. She always preserved her virtuous reputation in the midst of what was a bawdy world of traveling shows. In this painting I have chosen to capture her in the early part of her career with the Wild West show and in the background you can see Bill Cody and Sitting Bull on horseback watching her amazing skills. She is not only a role model for young women but for anyone who loves the history of the Wild West."-Morgan Weistling