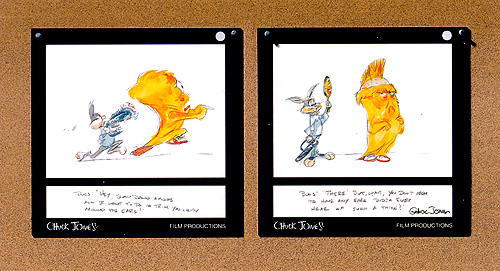 "If an inter-esting monster can't have an inter-esting hairdo, then I don't know what things are coming to!" So says the barber of Termite Terrace, Bugs Bunny. Give him a chainsaw for hair-clipper and there's no telling what might happen. Our poor orange-furred, hump-headed monster, Gossamer, peeved, but too stunned to act, looks askance at his new 'do'.

Based on original watercolors painted by Chuck Jones, this giclee has been re-interpreted as limited edition giclee storyboards complete with dialogue, cork bulletin board and push pins. This bears the official signature mark of Chuck Jones.