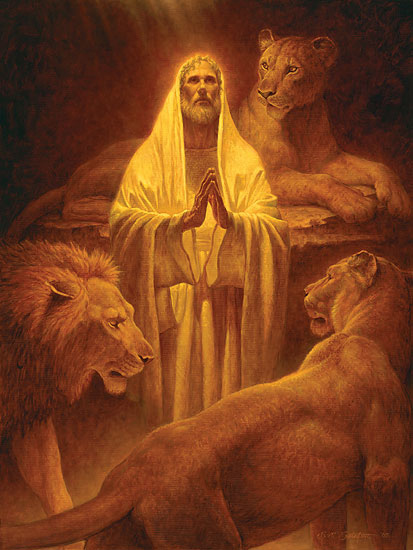 Like children’s stories, Bible stories teach us lessons about life. “I grew up in a small town and attended a Lutheran grade school where I was taught many Bible stories at a very early age,” says artist Scott Gustafson. “I think of my approach to my artwork as a form of storytelling; and although most of my work to date has been illustrating fairy tales, nursery rhymes and other forms of literature, it all really comes down to telling a story in pictures.

The story of Daniel is about a man who is punished for his beliefs by a king who was swayed by vanity and bad advice. But Daniel is also the story of true faith in the face of death and of a man who had the strength of his convictions. I chose to depict Daniel standing in a pool of mysterious light. Behind and around him, lions lurk in the shadows—nearly brushing his robes as they pace to and fro. Yet, these ravenous beasts dare not lay a single paw on the seemingly vulnerable figure who stands in their midst. In these turbulent times, the story of Daniel seems very appropriate. For although his faith is the reason he was thrown to the lions, it was also Daniel’s faith that ultimately saved him.”