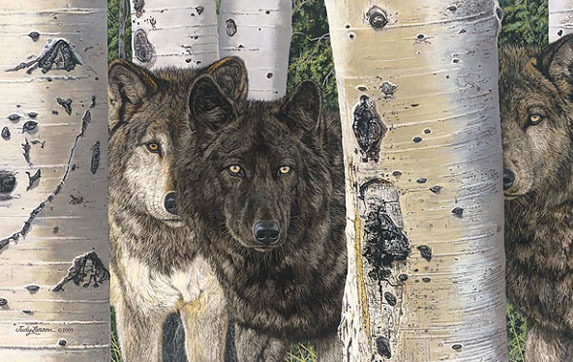 "Brothers and Sisters" by Judy Larson

The pairing of an alpha male and alpha female represent a wolf pack’s genesis, but it truly becomes a pack as the offspring arrive and grow. Judy Larson first introduced us to the Elsinore Clan in 2007 with The Alphas. Nearly two years later we meet the next generation with Brothers and Sisters.

The core population of most packs is comprised of the alphas’ offspring. This bond of blood is one the prime sources of the affection and mutual aid upon which these groups are so dependent. From birth, these brothers and sisters will compete for social standing with in the clan and assume roles and responsibilities uniquely theirs. The disappearance of a wolf from a pack such as Elsinore will leave a hole not easily and quickly filled.

Such is the case here with Brothers and Sisters. We can immediately see three of the Elsinore Clan offspring lurking among the aspens. Close examination will reveal Judy has concealed a fourth, though this member of the pack remains only in spirit. She is no longer with the pack, but the memory of her place and role within it still lingers.

Judy Larson stands alone in skill and storytelling mastery of her chosen medium: scratchboard. No medium demands more planning and precision in execution, yet her subjects are alive with a freedom of form that redefines those limitations. That skill combined with a passion for the wilderness and all things wild makes owning a Larson an essential part of any art collection.