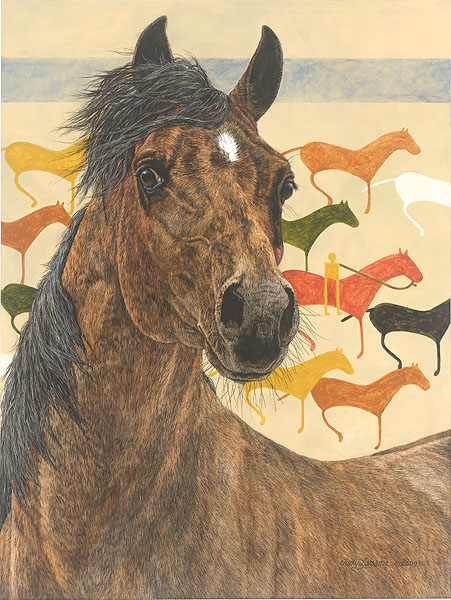 Artist Judy Larson’s newest fine art edition revisits one of her cherished inspirations, Native American storytelling and legend. Like her previous release Crow Tipi, The Elk Dog Tipi is from a Blackfoot story, this time the legend of how horses came to be known to man. It was a powerful legend since acquiring horses drastically altered the Native American way of life.

A poor, orphan boy, trying to find his way in the world, embarked on a vision journey. Traveling far from his tribe without success, the boy sat down to weep beside a large lake. Hearing the boy in his distress, a powerful Water Spirit, who lived in the lake, sent his young son to tell the boy that he wished to see him. Water Spirit's son cautioned the boy to close his eyes, hold on to his shoulders, and not to look as they started into the water. As they progressed deeper and deeper into the lake, Water Spirit's son told the boy that his father would offer him his choice of all the animals that lived in the lake. "Be sure to choose the oldest mallard of the ducks and all its young ones," instructed Water Spirit's son.

At last the son and the boy reached the underwater lodge of the Water Spirit, and the boy was told to open his eyes. The Water Spirit, an old man with long white hair, welcomed the boy and asked him why he was so sad. As the boy explained his plight, Water Spirit offered his help, telling the boy that all the animals in the lake were his to give, and the boy should choose which one he wanted. Remembering the son's advice, the boy asked for the old mallard, but the Water Spirit just shook his head and said, "Don't take that one, for it is old and of no value." Nevertheless, four times the boy insisted, and at last, the Water Spirit smiled and told the young boy that he had chosen wisely. The son then took the boy to the edge of the lake, and after night fell, the son caught the old mallard with a rope that he had braided from marsh grass. Placing the rope in the boy's hand, the son instructed the boy to walk on, but not to look back until sunrise.

As the boy traveled toward his camp in the darkness, he heard the flapping of the duck's wings behind him, but he did not look back. As he continued on, the flapping changed into heavy feet pounding on the ground, and the braided marsh grass rope began to turn into a rawhide rope. At sunrise, the boy looked back and beheld a large animal at the end of his rope, a horse. He mounted the horse, using the rope as a bridle. Many other horses joined his horse, and as the boy came into camp, the people were afraid, for they had never seen horses before. The boy dismounted, calmed his people's fears, and gave everyone horses and kept many for himself.

The boy gave the horse its Blackfoot name of elk dog, for it was large like an elk, but could serve the people, like a dog. He taught the people how to break and ride the horses, how to use them for packing, how to hunt buffalo from their backs, how to make bridles, hackamores and saddles, and how to use the horses to cross streams. When the boy grew older, the people made him a chief and honored him all of his days, for he was wise and generous.