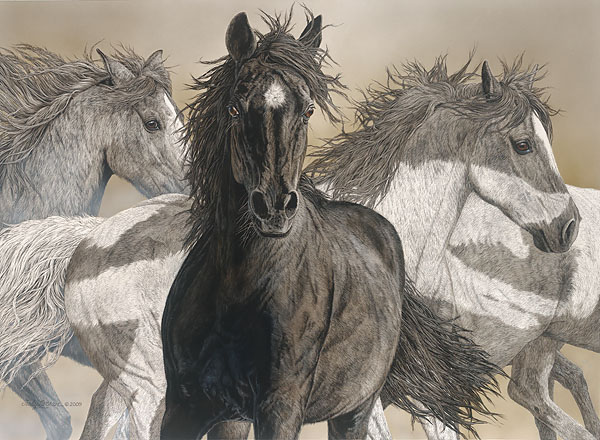 “Life, Liberty and the pursuit of Happiness” as “inalienable rights” is a concept that could only be born in a place where the land was abundant and its bounty teeming. Nothing is more American than wild horses ranging the West and wolf packs prowling the forested wilderness. Yet, these symbols of all that is wild and free are not only as threatened today as they have ever been, but are being rounded up and disposed of in a fashion they have never before had to fear: from the air.

In Judy Larson’s Flight, a herd of wild horses races away from the droning aircraft circling above. This method of rounding-up mustangs such as these is part of the program to further cull the 33,000 horses still living in the wild in 10 Western states. Another 30,000 are already in captivity. The Bureau of Land Management wants to cut this total number of horses by half!

Judy has hidden within this herd another who has even more to fear from above, an Alaskan wild wolf. Exploiting a loophole for “predator control” in the Federal Airborne Hunting Act of 1972, Alaskan hunters have found a way around the Congressionally-banned practice of hunting animals like the wolf from the air. Many hunters consider the practice, at a minimum, unsportsmanlike, since it violates the "fair chase" ethic of hunting. More significantly, they consider it inhumane since airborne gunmen rarely get a clean (i.e., relatively painless) kill.