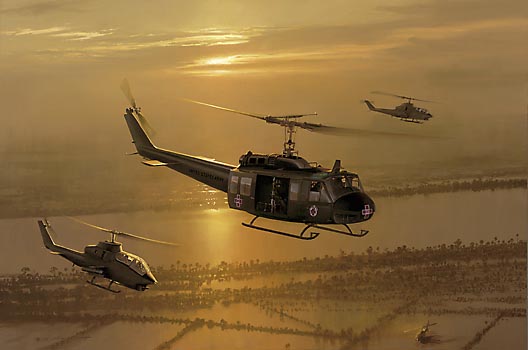 Limited Edtition Paper Lithograph
Edition Size: 1,450 signed by the artist, counter signed, and consecutively numbered
Image Size: 23" x 15-1/4"
Counter signed by Michael J. Novosel and Michael J. Novosel, Jr.
With plexiglass fragments from his helicopter's windshield buried in his hand, calf and thigh, Michael J. Novosel, pilot for the 82nd Medical Detachment, steadied the 'copter as another soldier pulled a wounded soldier to safety. Met by intense groundfire, Novosel still managed to save 29 soldiers by going back into enemy fire again and again. For this, he was an Army Medal of Honor recipient in the Vietnam War. This print is a fine tribute to Army aviators, their crews and the gunships that protected them. It is countersigned by both Novosel and his son Mike, Jr. They were the only father and son team to fly in the same unit—and each had the task of rescuing each other and flying more than 8,800 wounded to safety or emergency medical treatment.